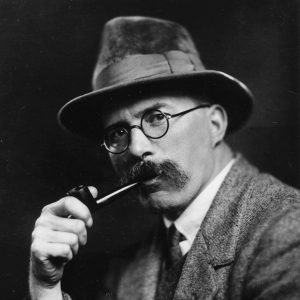 Arthur Ransome, the well known author of Swallows and Amazons, was born in Leeds in 1884. He attended preparatory school in Windermere and spent summer holidays with his family at Nibthwaite, which is to the south of Coniston Water. After completing his education he went to work for a publisher in London, however, he would escape north whenever he could. He became friends with W G Collingwood, the artist and writer who lived at Lanehead beside Coniston Water, and this is where he learned to sail.

In 1913, after an unsuccessful marriage, he went to Russia and became a newspaper correspondent. It was here that he met Evgenia Petrovna Shelepina, who had been Trotsky’s secretary. They lived in Russia throughout the First World War and later moved to Estonia. They lived here for several years enjoying cruising on the Baltic in his boat Racundra. He eventually obtained a divorce in 1924 and was then able to marry Evgenia and return to the Lake District.

He spent the rest of his days, apart from two occasions when he went south, in this area. This provided the setting and influence for Swallows and Amazons, which has captured children for many generations. Hill Top at Haverthwaite was his last house in the Lakes, he is buried in the churchyard at Rusland. The Museum of Lakeland Life, which is in Kendal, has a reconstructed Ransome Room with artefacts and memorabilia.